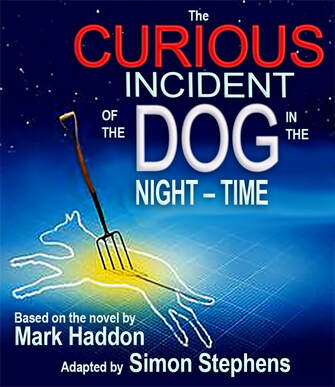 Auditions take place Tuesday September 6th and Wednesday September 7th 16th beginning at 7:00 PM.  Auditions consist of cold readings from the script.  Auditioners are welcome to attend both evenings of auditions, but it is not required.  There is no pay. Headshot and resume are recommended but not required.

Rehearsals will generally be Monday through Friday 7-10:00 pm. A more detailed rehearsal schedule will be provided at auditions.

Christopher Boone (male, age late teens to mid 20’s but looks to play 15) - Brilliant at “maths”, searching for the killer of his neighbor's dog, Wellington. Christopher is an autistic teen exploring for his place in the world as he seeks to solve the mystery of Wellington’s death. Actors with autism are encouraged to audition. Must be comfortable executing specific choreography including being touched (hugged, touched on shoulders) and lifted into the air (the ensemble will lift the actor in the air as part of the narrative, etc). Technical elements in this show will include projections, quick changes in lighting, and loud sound cues. English accent.

Ed Boone/Others (male 35-55) -Christopher’s father; estranged from his wife, Judy and struggling as a single parent trying to raise his son the best he can. A working class man. Proud, gruff, and brusque, he is unable to convey his emotions and has trouble communicating with Christopher, who often frustrates him. And though he’s naturally practical and much more patient in dealing with Christopher, a difficult situation can make him lose it, sometimes violently. English accent.

Judy Boone/Others (Female 35-55) - Christopher’s mother; estranged from her husband, is a secretary and is a working class woman with a tough exterior who has no support system to raise her son. She blames herself for her inability to cope with Christopher effectively. Loving, yet impatient, she has felt very alone in her situation and it frustrates her to a point of absolute desperation. English accent.

Siobhan (Female identifying, 30-40) - Christopher’s teacher and mentor, the only person in Christopher’s life with an understanding of his situation. She strives to teach Christopher how society works and how to behave within its guidelines. Constantly negotiating around Christopher’s anger, she is professional, warm, caring, and calm. She often serves as the narrator of Christopher’s story and of his feelings; English, Irish, Welsh, or Scottish accent.

ENSEMBLE: Seeking six versatile and talented ensemble members. Each of the ensemble members will play multiple roles, including at least one featured speaking role. They will also assist in creating the many locations and elements of the story, remaining on stage for the majority of the production. Ensemble actors will be required to lift Christopher as a group as they are able and must be comfortable with physical contact and choreographed movement.